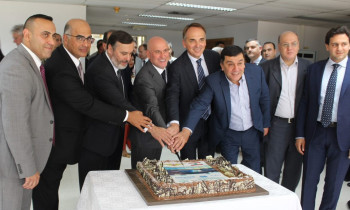 Airways International, the commercial arm of the New Zealand air navigation service provider, has completed installation of a TotalControl LCD tower simulator and two radar/non-radar simulators at Beirut-Rafic Hariri International Airport after a 12-month project. The facility, to be used to train DGCA’s ATC controllers and students using simulated scenarios that mimic the real world, is now fully commissioned after the completion of site acceptance testing this week.

Lebanese Minister of Public Works and Transport Youssef Fenianos officially opened the simulation facility in a ceremony attended by Lebanese Government and DGCA Lebanon delegates, as well International Civil Aviation Organisation (ICAO), Airways and New Zealand Trade and Enterprise officials who travelled to Beirut to mark the significant milestone. The contract to build and install the simulator was between Airways International and ICAO on behalf of DGCA Lebanon.

Airways International CEO Sharon Cooke says the organisation is proud to support DGCA through provision of its world-class simulation technology. “Airways is excited to mark this milestone after leading this strategically significant project for DGCA and the Government of Lebanon. We look forward to further developing this partnership as DGCA builds their ATC training capability,” Ms Cooke says.

“We have been very impressed with Airways throughout the project. They have been honest and flexible, and have partnered with DGCA to provide us with the best fit-for-purpose simulator. Airways has a strong reputation as a global specialist in ATC simulation and training – the training we have received is exceptional,” Mr Nassereddine says.

Airways has been delivering ATC training solutions and consultancy services to the Middle East region for more than 20 years. In the past two years the organisation has delivered training for key customers in Saudi Arabia, the United Arab Emirates, Kuwait and Bahrain.

Airways trains its own air traffic controllers and works with other ANSPs in the delivery of world class air traffic control training and simulation services and solutions. With customers in the Middle East, Asia, Hong Kong, the Pacific, Africa, Europe and North America, Airways trains up to 150 ab initio students globally each year and also provides training to over 100 ATC instructors, assessors and examiners annually.